You are here: Home / Technologies and Innovation

Here you can find general information on the important technologies that humanity is developing in order to increase the energy efficiency and to limit the negative impact on climate change.

The consumption of fossil fuel energy have negative effects on our health and significantly contributes to the change in our climate. This is why investment in energy efficiency are so important.

However, investing in energy efficiency alone is not enough because people need to be informed and educated about their energy consumption and the need to invest in innovative buildings and technologies that will allow us to consume less energy without sacrificing out comfort.

Solar – it relies on the nuclear fusion power from the Sun. The energy is collected from the Sun and then converted  – the technologies used for this process are for example solar collectors or photo voltaic cells.

Wind Power – through wind turbines the wind energy could be turned into electricity or used to pump water.

Biomass – the organic matter that makes up the plants is called biomass and it can be used to produce electricity, transportation fuels, or chemicals.

Geothermal power – it relies on the Earth’s internal heat for electric power production, heating and cooling of buildings.

Other forms of energy – energy from tides (resulting from the gravitational pool upon the Earth) and the oceans  are other forms that can be used to generate electricity.

Facts about the electric vehicles – ecological and economic benefits

More specific information about the benefits of the electric vehicles you read here.

The Green eMotion project is part of the European Green Cars Initiative (EGCI) and aims to support the ambitious goals of the EU in terms of significant reduction of CO2 emissions from transportation. The project collaborates with partners from industry, energy sector, electric cars manufacturers as well as municipalities, universities and research institutions. The goal is to identify necessary conditions and standards for Europe-wide electromobility.

More about the project and its results you can find on the official  Green eMotion page.

More information about electric vehicles you can find on the informational portal Green Motion Education.

RePowerMap is an interactive map that allows users to share their examples of energy efficiency systems and renewable energies. It is world-wide accessible and creates an network for sharing of practices, ideas and experience. It is a non-profit initiative funded by the Intelligent Energy Europe.

You can view the map and add your example here. 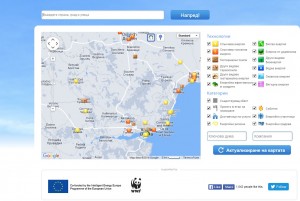 The international project TRAIN-TO-NZEB is financed by the “Horizon 2020” program and aims to support the development of a qualified network of experts and consultants in the field of nearly zero-energy buildings (NZEB) design and construction. The program envisions the establishment of educational centers which will give opportunities for practical exercises and will enhance the growth of the network of building experts and engineers. The project is managed by a Bulgarian partner – the Center for Energy Efficiency EnEffect.

More about the TRAIN-TO-NZEB project and the activities of the Center for Energy Efficiency you can find on the official webpage of EnEffect.