You are here: Home / Competition and awards

The annual National Nature Conservation Awards, named after the first Director of the Rila National Park Mimi Pramatarova, is part of the activities of the Fund.

Mimi Pramatarova was born on 4 June 1956 in Blagoevgrad.

In 1981, she graduated the Biological Faculty of the Sofia University with a major in ecology, as well as plant and flora protection.

During the period 1981-1990 Mimi Pramatarova worked as a biologist in Pirin National Park. There she created a very rich herbarium, which has been maintained until today and which is in the basis of the park management. She has also left tens of notebooks and ledgers, containing extremely useful information related to the park biodiversity.

During the period 1990-1996 Mimi Pramatarova worked as a Chief Expert on biological diversity at the Regional Environmental Inspectorate – Blagoevgrad and actively participated in the preparation and announcement of Rila National Park.

Since 1996 until the end of her life, Mimi Pramatarova had been the first director of the Rila National Park. She guided the creation of the institution and the team, as well as the development and adoption of the first Park Management Plan. She truly and thoroughly understood and firmly implemented the principle of wide public participation in the park management. Instead of getting involved in a conflict with the opponents, she undertook the difficult route of attracting partners and winning supporters. She was looking far ahead into the future and was sure about the success of the new beginning.

Mimi Pramatarova invested much love and energy into the work with the young people. There are tens of children, whom she has won with her genuine devotedness and unselfishness related to the wild nature protection.

Crystal clear in her deeds and thoughts, Mimi Pramatarova is a real and faithful friend, cheerful, strong, bright and unique in all her appearances!

During 2006, aiming at passing on her devotedness and love of nature among our and among next generations, friends and colleagues of Mimi Pramatarova set up an Initiative Committee and laid the beginning of a National Writing Competition on nature conservation topic in honor of her fiftieth birthday. In the same year for a first time the award was given to the United Children Complex in Blagoevgrad for their comprehensive partnership with Rila National Park.

Each year the competition has a specific topic – “The Nature and People of Bulgaria in 21st Century”, “The Forest – One Endangered World”, “If They Could Talk”, “Healing Potion, Hidden in the Flask”, “The Unusual Common Birds”. 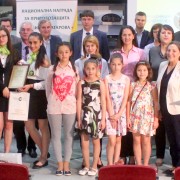 The National Trust Ecofund held its annual event for 2017 on the 5th of June, the National Polytechnic Museum in Sofia. At the event, the annual activity report for 2016 was presented to the public. Besides the implemented investment projects totaling over BGN 13 million, in 2016 the Fund also launched a Pilot Scheme for […]

In the first contest, we are inviting students from Bulgarian schools (from 8th to 12th grade) to present their project idea on “How to educate the youth on the topic of climate change and inspire them to make a change”.

END_OF_DOCUMENT_TOKEN_TO_BE_REPLACED

The second competition for the Mimi Pramatarova award is for a short video that illustrates an interesting perspective on climate change and its impact on people’s lives.